If you've been diagnosed with Barlow's Disease, ask your surgeon about his or her expertise and repair rate for Barlow's valves, a degenerative form of mitral valve disease. Reference mitral repair surgeons (surgeons certified for their experience in mitral valve repair) can fix up to 95% of Barlow's valves.

The syndrome of mid-systolic click accompanying a systolic murmur was first described in the late 1800s, but it was in the early 1960s that its association with mitral regurgitation was demonstrated by Barlow and colleagues using cine-ventriculography1 . Criley et al.2  correctly identified the mechanism of the regurgitation as posterior leaflet prolapse due to excess leaflet motion, coining the phrase "mitral valve prolapse". Carpentier and co-workers later characterized the surgical lesions resulting from the myxoid degeneration present in Barlow's disease, which included leaflet thickening, large redundant leaflets, chordal elongation or rupture, and annular dilatation. As the myxoid degenerative process often affects the entire valve, patients with Barlow's disease generally have complex valve pathology and dysfunction, which is most often multisegmental (i.e. involves more than one segment of the posterior or anterior leaflet).

Patients with Barlow's mitral valve disease are generally adults around the age of 50 years who have known for a long period of time, often decades, that they "have a murmur". Often asymptomatic, patients may have been followed by an internist for years, and referral to a cardiologist and subsequently to a cardiac surgeon is usually triggered by the development of symptoms or signs such as atrial fibrillation, shortness of breath and fatigue, or echocardiographic documentation of ventricular or atrial enlargement, or a decline in ventricular function, often accompanied by varying degrees of pulmonary hypertension. Physical examination most often reveals the presence of a mid-systolic click and a mid to late systolic murmur, which reflects the timing of prolapse in the setting of excess tissue and chordal elongation without chordal rupture (i.e. flail leaflet)2.

Echocardiography is a sensitive tool in the differentiation of degenerative mitral valve disease. A striking feature of the patient with Barlow's disease is the size of the valve apparatus - the leaflets are usually thick, bulky, elongated, and distended; the chords thickened and elongated, often mesh-like in nature; and the annulus dilated and enlarged, often times greater than 36mm in the intercommissural distance (Figure 2). The prolapse is often multisegmental, and involves both leaflets in up to 40% of patients3 . The insertion of the posterior leaflet is often displaced toward the left atrium away from its normal insertion in the atrio-ventricular groove, creating a cul-de-sac at the base of the leaflet. The bodies of distended leaflet segments often billow above the plane of the annulus, and the margin of the leaflet segments prolapse in mid-systole in the setting of chordal elongation, or in early systole if chordal rupture has occurred. Calcification of the annulus and papillary muscles may be present. Real time three-dimensional echocardiography is allowing additional clarity of the segmental nature of the billowing, as well as prolapse, in Barlow's disease4 ,5 ,6  and may play a critical role in the preoperative work up of these patients in the future.7

The complexity of surgical lesions in Barlow's mitral valve disease is consistent with the echocardiographic findings (Figure 2). Lesions include excessively thick and billowing leaflet segments, chordal elongation and chordal rupture, calcification of the papillary muscles and/or annulus with chordae restriction, and severe annular dilatation with giant valve size. It is important that the cardiologist as well as the surgeon has an appreciation for these lesions, as the complexity of techniques required to achieve a successful repair then becomes obvious in this subset of degenerative mitral-disease patients. Dealing with excess tissue height is an important consideration to reduce the likelihood of postoperative systolic anterior motion. Repair of Barlow's valves is thus more complicated and, in our experience, often requires multiple different techniques and 2-3 hours to remove all of the diseased tissue, and reconstruct the leaflets to a normal configuration3.

To achieve a Barlow's repair, the surgeon therefore needs to be well versed with various advanced mitral repair techniques, such as extensive leaflet resection, sliding leaflet plasty, chordal transfer, neochordoplasty, commissuroplasty, annular decalcification and use of large annuloplasty rings. Patients with advanced forms of Barlow's disease will therefore likely have a high probability of successful valve repair only if done in reference centers by mitral subspecialists (Table 1).

Schedule an Appointment or Ask a Question 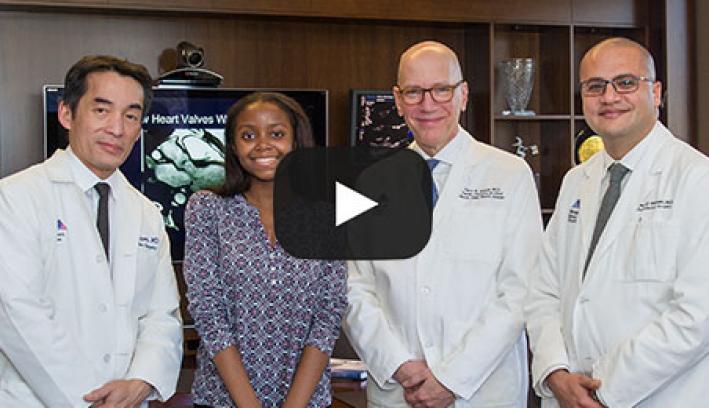 When we saw her again in the clinic, I wouldn't imagine that this was the same person. We saw her almost die at the bedside that night. ”