I will start with the scenario that we see now and then. So, this is a patient, 68 years old female patient with aortic stenosis. Body surface area is 1.5. Good LV function. No comorbid factors. We have consented her, she is in an operating room. The plan is to have a stented biological valve, pericardial valve. The surgeon opens her up. The biggest valve size he can fit in is a 19 mm. He looks at the chart that comes in the insert of this valve and that would put her in so called severe mismatch with the indexed orifice area of 0.73 in the red. So, you are a surgeon or you are the cardiologist who referred this patient, what would you expect as a cardiologist and what would you do as a surgeon. So, would you proceed with a standard 19-mm stented valve, pericardial valve, would you put a 19 mm mechanical valve expecting better hemodynamics, would you expect root enlargement and a 23-mm stented valve pericardial, the subcoronary stentless valve 21 mm, or would you replace the aortic roots with a 23-mm porcine valve? So, half would enlarge the roots and put a 23-mm stented valve and about 20% would use a stentless valve either as a root or subcoronary. So, I will follow on with that question and ask why you gave the answer. What is the reason that you gave best qualifies the answer. You believe a 19-mm valve was inconsequential in most patients, you believe it's associated with reduced short and long term survival, you believe that industry charts indicate the patient has severe patient prothesis mismatch, PPM. You believe it is best to avoid 19 mm valves but we have no reproducible ways of doing so or you believe stentless valves or roots have better long-term outcome. So what is the reason you gave the answer you gave; it is inconsequential, it has reduced survival, the industry charts say it is severe, you do no have good ways of fixing it, or the stentless valves are best. Let's see the answer. So, most people believe the stentless valves or root enlargement have better long-term outcomes. A lot of people go by the charts and only 14% believe it is inconsequential.

This is another paper about stentless valves, now this is a randomized trial. So, stentless valves are supposed to do the trick and in a randomized trial they found no difference in the orifice area in patients randomized to either Perimount valve or a Toronto stentless valve. So, the sixth myth I would like to dispel is that these strategies to eliminate patient-prosthesis mismatch result in better long-term outcomes. There are really no good comparative data and even if there are late gains there might be offset by the higher early mortality that I have alluded to, but I think more important to consider is that patient-prosthesis mismatch might actually just be a confounding factor and the worst outcomes may have nothing to do with the valve area but to do with whatever factors make that patient have patient-prosthesis mismatch in the first place. This is a paper from the Vienna group again which I've shown earlier and they have looked at patients with mismatch and those without them and compared various characteristics. It does not matter what the details are but you can see a lot of P-values, a lot of differences; their older like seven years older than the people with mismatch there are more females who have a higher euro score and indeed on multivariant analyses the only thing that has predicted the outcome in these patients was not prosthesis mismatch but the euroscore and diabetes. So, a lot of these patients that we say do badly because the valves we put in are too small may be they were going to do badly anyway because of other factors within the patient and they said that the result shows that patient-prosthesis mismatch is stronger, I should say that with unfavorable preoperative conditions. So those unfavorable conditions probably put them at disadvantage at the time of surgery. So, the last myth I would like to dispel is the one of low-grade intra-aortic stenosis. So, we say that if the gradient is low there is no EF. That is the one that you really must, must, must avoid patient-prosthesis mismatch and indeed there are data to show that. So, here you have data from Ruel and colleagues and you find that if you have an impaired ventricle and patient-prosthesis mismatch your survival is worse and it is good to read the papers because when the study is not looking for what you are looking for you find other things that they were looking for. So, if you look here at the top of the graph you see that patients with normal LV with no mismatch and patient with impaired LV with no mismatch seem to have the same survival and that does not make sense because we all know that impaired LV function is a predictor of survival and obviously if they were writing a paper about impaired LV they would have not published this but anyway, what's important here is that they defined a poor LV function as less than 50% which probably isn't what most of us in this room and certainly not what Dr. Carabello would regard as low EF aortic stenosis. So, really if you torture the numbers they will tell you whatever you want to tell them, they will confess to anything and that is what statistics do. So, many of you would have seen this picture before. This is what tells you that if you have a low EF you must not mismatch the patients because if you have a low EF here and severe mismatch you are 70 times more likely to die than anyone else which is interesting because how is it possible anything in biology that your odds ratio is 80, it is not possible. So fine, what it reveals is interesting but there is something that is hidden which has to be vital and the answer is if you read between the lines. So, as I said you torture the numbers they will tell you anything. So, you have 1000 patients. This was published in Circulation. So, Circulation, the editors like the 1000 patients but they did not realize what was concealed by the bikini which is that in this group on which they base their entire study there was three patients. So, there were three patients with poor LV function and mismatch. Of course, they all died and they wrote a paper in which they say that 1000 patients published in Circulation, the best journal in our specialty, to say that you should not mismatch patients. So, I will tell you what the facts are that I see. The first is that the definition is unclear. The second is that most cases are of no clinical significance; I agree some are but most are not. The problem is we cannot predict those cases like the case we saw this morning, I think it was Lisa that presented the echo this morning. So, sometimes it is significant but the valve area is a poor surrogate and indeed there may be confounding factors rather than the valve area that explained this and those are approaches that we favored like 50% in the audience wanted to enlarge the root, 20% wanted to do stentless valves. They do not yield consistent results even in the hands of the experts, so I would implore that the cases should be considered on a case to case basis and we still need research to be able to predict who actually develops clinically relevant patient-prosthesis mismatch and the fiction is really everything else.

Thanks for your audience. 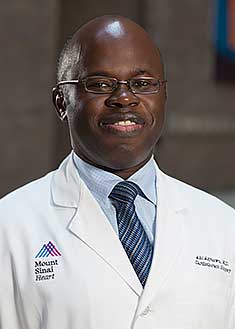